We are terrible sports fans in our house. Today may be the first football game I’ve watch all year. (My Wisconsin roots are hiding in shame. Go Packers). I was informed by my parents that today was an important game, so I decided a soup that suited football was needed. A soup for every mood, no? I pulled up Pinterest. I searched for football soup. I found this recipe.

Its a tortilla soup. If you know me well, you know my taste buds are Mexican. I can (and would) eat Mexican every meal of my life if I could.

5 cups of chicken stock
2 cups of diced bell (sweet) peppers. I used red, green, yellow, and orange
1 cup of water
2 cups peeled, cored, and roughly diced tomatoes (I used the Arkansas traveler tomatoes from our CSA), you could use canned diced tomatoes here if you wish, just drain the juice before adding to your soup
1 1/2 cups of fresh sweet corn, about 3 ears cut off the cob
1-2 red Serrano peppers*, seeded and finely diced
3 cups of cooked and shredded chicken (I used a combination of white and dark meat)
1 large yellow onion diced
2 Tablespoons chili powder** (NOT chili seasoning – you want just the dried ground up chilies, not the other stuff)
1/2 Tablespoon dried oregano**
1 1/2 teaspoons ground cumin**
juice from 1/2 a lime (taste the soup before serving, add the juice from the other half of the lime if desired)
salt and freshly ground pepper to taste
*If you don’t like spicy food, eliminate the Serrano peppers from the recipe.

**It is important to use organic spices, because regular ones are irradiated, causing them to loose all nutritional benefits.

Prepare your chicken stock [or open the box(es) of organic chicken stock you bought], and pour it into a crock pot or large pot on the stove. Add 1 cup of water. Now add in the bell pepper, corn, tomatoes, onion, chicken, and spices with juice from 1/2 a lime.

Let simmer on the stove for about an hour or so, stirring every once and a while. Tasting your soup along the way to make sure the veggies have reached your desired consistency. If you’re using a crock pot (which I love to do!) let it simmer for at least 2 hours, up to 5.

Top your football soup with sliced avocado, shredded cheddar cheese, and maybe a dollop of sour cream. Tortilla chips or Fritos (this takes a little bit of the organic & local out of it though) are a pretty solid addition as well. Whatever you want!

I opted to leave the pepper out in hopes of it being kid friendly. I also tossed everything in the slow cooker for the afternoon instead of cooking it on the stovetop. 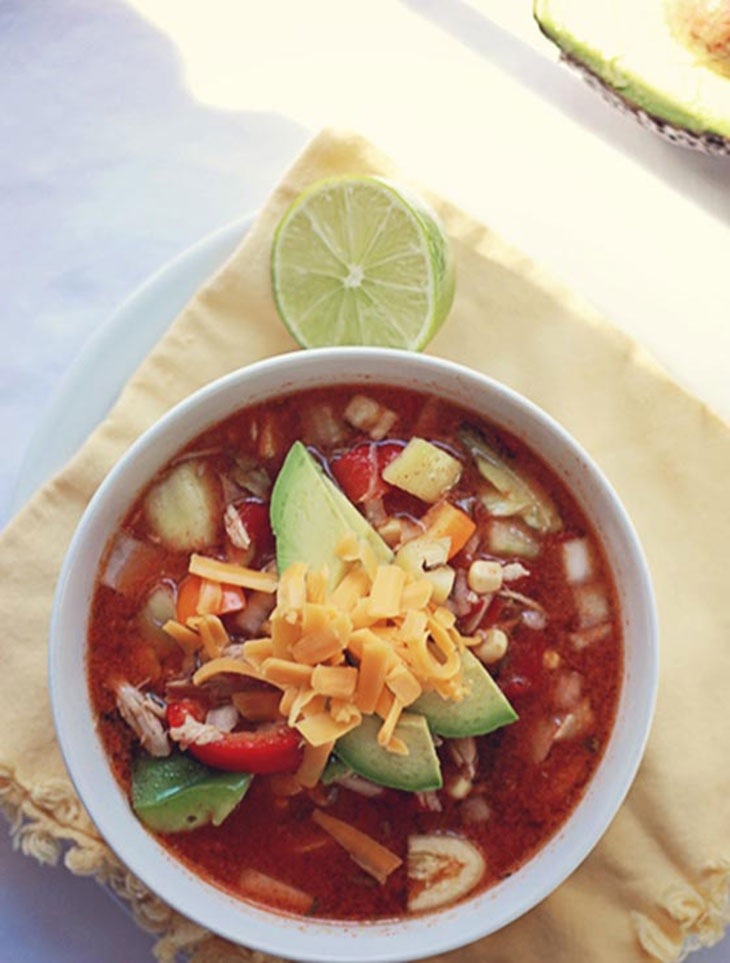 Another soup success. I already have a tortilla soup recipe in regular rotation in our house but it’s cream based. This one was much lighter, and I really enjoyed it.

Anyone else cooking soups on Sundays? The tradition was initially started by my sister. I adopted it for our family. My friend Heidi has adopted the tradition as well. You can find her recipes on her blog Loveeachstep.

Finally made it into my 30s. Life is simple, rewarding, and full of lessons to be learned and goals to achieve. View more posts