Cole lined up with his school to run the Final Mile race at this weekend Shamrock Marathon. He was ready to go. He wanted to run fast. This is his forth year running. He’s grown up so much. This race, every single year, is a litmus test for his growth. His times have improved. He’s approach has matured. He has gained confidence each year that he has ran.

When we found his school at the start line, I said goodbye, wished him luck, and told him to go run fast. He was all smiles. 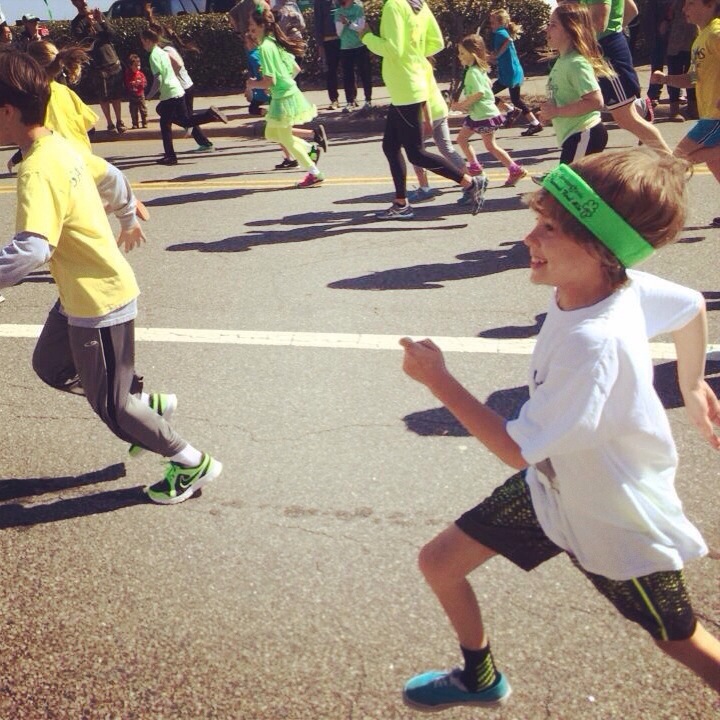 He went for it. He went out hard. He ran fast. And then he ran out of steam. When he hit the boardwalk, he decided to walk. When I finally saw him, a few blocks north of the finish line, he was still walking and looking sad. I tossed my stuff to my mom and joined him on the race course. We don’t give up on ourselves. We try our bests. We have fun and smile. I tried to get him reengaged with his race. We could walk, but we were going to smile. He ended up running beside me to the finish line, but his somber face didn’t go away. He detached.

As a mom, this is the hardest thing to witness. I don’t care about finish times or even if he runs. But I do want him feeling proud of himself. That didn’t happen today. His spirits improved as we made our way home. He confessed he was disappointed he had to slow down.

Just like the past three years of running have been a reflection of Cole’s life, this year is the same reflection. He is changing and growing up. He’s entering the early stages of puberty. He wants to be ready to tackle life in the fast lane, but he’s not there just yet. He’s disappointed when he isn’t allowed or isn’t capable of making “grown up” decisions. He’s a kid teeter-tottering between boy and teenager.

He will learn and grow. It is part of growing up. These lessons he is learning at the age of nine (almost ten), I am still learning at thirty three (almost thirty four). My biggest fear for tomorrow is that I will do exactly what Cole did today. I will start too fast. I’ll run out of stream, and I’ll disengage.

Tomorrow is my chance to be an example for Cole. We can attack running (and life) too fiercely. It’s okay. Life is much more about how we react to situations than it is about how we got to that point. It’s our response to life that matters.

A wonderful friend reminded me of this today. If I show up at the start line tomorrow, if I just run, if I respond and react to what is going on in my body and my heart, I will have a successful race. I just have to show up and stay engaged. I have to embrace who I am and where I’m at right now. If I let my heart shine, I will have won.

It’s not the time on the clock or the pace on my garmin that matters. All that matters is that we are smiling at the finish line.

3 thoughts on “We Celebrate Finish Lines”